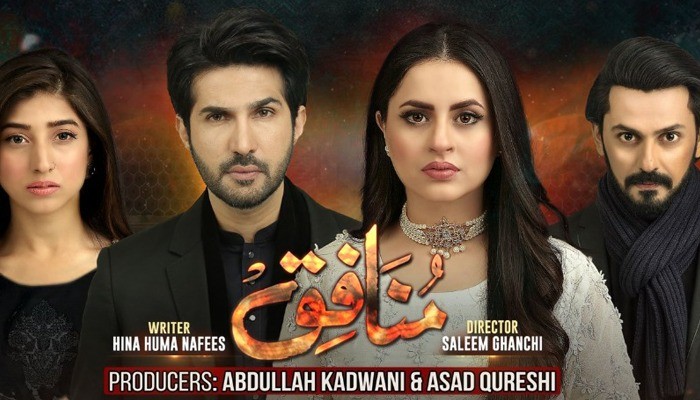 Drama serial Munafiq has kept its audience glued to the screens with its compelling storyline for the past few months. Having aired 59 episodes so far, the producing powerhouse of Abdullah Kadwani and Asad Qureshi will unveil if the strength of motherhood will overpower the wealth of Ujala’s in-laws in the last episode.

Munafiq has already proved itself to be a game changer in the entertainment industry for breaking two records in its recent mega episode. Under the banner of 7th Sky Entertainment, Munafiq dominated the TRP ratings for Geo Television for two hours straight — initially touching 18.0 in the ratings in the 7 PM slot and maintaining the rating for an hour. The episode then acquired a whopping 22.7 TRPs during the 8 PM slot on March 31.

The mega episode not only created a new record but also became the first drama serial episode that maintained this impressive rating in the 7 PM slot for an hour. The next episode that aired on April 3 – which showed Arman divorce Ujala – broke the drama serial’s own record with an 18.1 TRP rating that week.

Munafiq’s second last episode has summed up how Mrs. Sabiha’s influence falls into decline due to her own arrogance. Despite Arman’s insistence, Mrs. Sabiha refuses to sell one of her properties to a more influential businessman and politician, which leads to the abduction of her only son, Arman (played by Adeel Chaudhry). Her daughter-in-law, Ujala, who has been trying for the custody of her child, has to find the courage to fight her own case alone after her lawyer withdraws from the case following death threats from Mrs. Sabiha.

Director Saleem Ghanchi has captured Ujala’s grievances as well as her courage meticulously, helping Fatima Effendi ace her role as the series lead Ujala. Her character, who belonged to an underprivileged family, was brought home as Arman’s bride by his powerful and wealthy family, as compensation for the death of her brother and father in a deadly factory accident. Marina Khan plays the manipulative Mrs. Sabiha, who launches a constant onslaught of challenges in Ujala's married life. Sobia (Mariyam Nafees), Arman’s chosen partner, adds insult to injury by repeatedly reminding Ujala of her place in their social hierarchy.

Adeel Chaudhry’s role switches between emotional dialogue to intimidation, proving that he is at once a protective father and a fiery confrontational individual. Hamza played by Bilal Qureshi plays Arman’s best friend who later turns into a rival because of his sympathetic feelings for Ujala. Hamza proves his love, by protecting Ujala from her in-laws’. Although Hamza manages to win her trust, Ujala finds it difficult to love him back because of the troubles he had caused her earlier in her married life.

An episode earlier this week showed Mrs. Sabiha finally seeing Sobia’s true nature when she refuses to take care of Ujala’s child despite her own insistence earlier. Sobia is slammed with an unexpected talaq in the heat of the moment by Arman, while Ujala’s child, Affan, fights for his life in the hospital without his mother by his side. Will the court grant Ujala the custody of her child? Is it going to be too late for Mrs. Sabiha to fix her mistakes now that her grandchild lies helpless in a hospital?

Munafiq will air its last episode on Wednesday at 7:00PM.