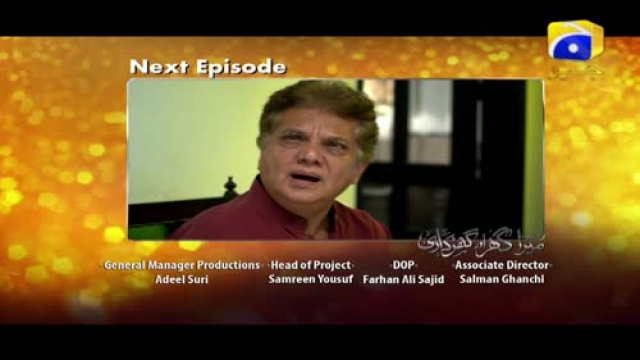 Mera Ghar Aur Ghardari - Episode 14 Teaser | HAR PAL GEOrnrnThe story revolves around Fakhra, a widow, whose children are the focal point of her life. She has given all her life to Hamid, Arshad, Tariq and Hina. She is satisfied with Fouzia, her daughter in law, but unhappy with Asma, wife of Arshad, as she thinks very high of herself; which has changed the dynamics of the house. Tariq, develops feelings for Afshan, sister of Asma. Fouzia agitates against the marriage, but she eventually surrenders seeing the acute emotions of Tariq. rnWedding preparations are in full swing. Tariq meets a deadly accident which makes him physically impaired. Despite knowing his physical condition, Asma still marries Tariq and does not support Afshan in domestic politics. On the other hand, Zara, first wife of Khalid, comes back from USA with a baby boy which ruins the life of Hina; consequently, she moves to her mother’s home forever, and that is the time when Tariq suddenly gets up from the wheel chair. She is also mistakenly given divorce…rnHow Hina and Khalid will get together? Will she marry someone else and never forgive the mistake of Khalid? How Asma will ruin the tranquility of the house and what will be the suffering of Fakhra in the role of a mother? rnrnWritten by: Sameena AijazrnDirected by: Syed Aashan AbbasrnProduced by: Babar JavedrnrnCast with respective Character names:rnRubina Ashraf as Fakhra rnYasir Mazhar as Hamid rnFaiq Khan as Arshad rnHumayun Ashraf as Raheel (script name Tariq)rnNaheed Shabbir as Fouzia rnAlia Ali as Asma rnFaria Sheikh as Afshan rnGul-e-Rana as Ghazala rnZia Ghorchani as Akbar rnRizwan Jafri as KhalidrnTanveer Jamal as ZaheerrnSumiya Baksh as HinarnrnrnFor More Videos Subscribe YouTube - https://www.youtube.com/harpalgeornrn#Meragharaurghardarirn#harpalgeorn#GEO