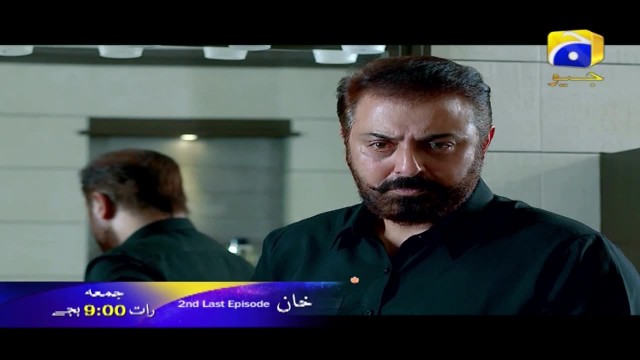 KHAN – Episode 29 Promo | Har Pal GeornrnKhan is the story of a homicidal kingmaker, who has strong influences in making and demolishing government. He lives with his family members in a gigantic villa apparently as a social worker, loving father and a noble person of society. Khan is out and out a family man, who cares about every relation in his surroundings. He pampers his wife, gives unconditional love to his daughter, and being the caretaker of his sister speaks volume about his gentleman hood. Not only this, he always remember his ex-lover in a sincere manner but very few of people know the other side of khan’s dark personality.rnrnKhan has opened his eyes in a village living parents, where they served in a feudal family. He used to like a neighbor village girl Sarwat, who has similar feelings for Khan. The two of the lovebirds were emotionally attached in a string of loyalty, adoration and merriment. Their deep love seems like an unbreakable bond but fate has something else in store. One day fuedal’s son kidnapped Sarwat for looting her honor, and also murdered one resistance creating person. The all in all feudal lord puts immense pressure on Khan to take that murder on his head and also promises for his bail. Khan appears in police station and accepts the crime of murder without knowing he is also accepting rape of his love interest. When Sarwat visits Khan in police station, she asks for whom he is saving real culprit and spit on his face. This act actually jolts Khan’s ego and a volcano of revenge erupt in his mind. The emerging circumstances take Khan far away from his lover and he get to know about his real enemies. A resourceful person in jail helps the Khan to be free from custody while taking oath from Khan to work for underworld.rnrnNow one-eighty degree opposite Khan releases from Jail, whose main mission is to gather unparalleled power, top-secrets of government officials and cutting the throats of opponents. He emerges as billionaire; a plutocrat and an underworld don who a social activist for world but a game changer from the back. He also finds his lover marries with his political rival and the sweet memories from past keep chasing khan in a bitter manner.rnrnCast: Nauman Ijaz, Atiqa Odho, Yamina Peerzada, Fatima Shah, M. Ali Josh, Ali Hashmi, Saba Hameed, Usman Mazhar, Hina Zaidi, Aijaz Aslam, Shaista Lodhi, Waseem Ahmed.rnWritten by: Syed Atif AlirnDirected by: Ali Faizan AnchanrnrnWatch More Episodes of KHAN – Subscribe https://www.youtube.com/harpalgeornrn#HARPALGEOrn#GEOENTERTAINMENTrn#GEOTV”