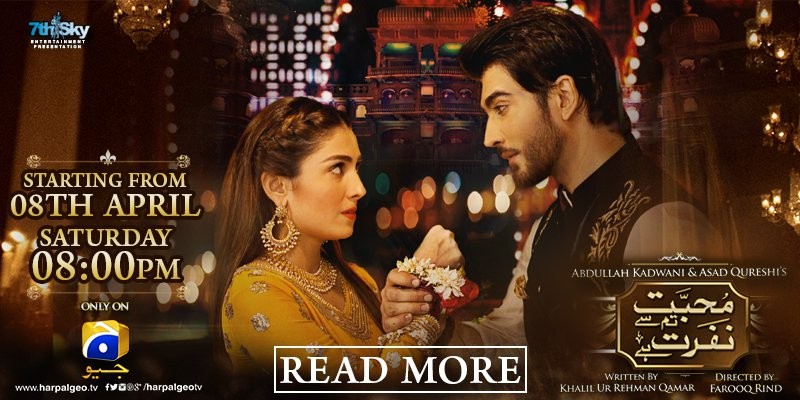 The countdown begins and the wait is almost over! GEO TV  bring to you , "Mohobbat tumse nafrat hai", starring ,the beautiful Ayeza Khan as Maheen, the ever-handsome, Imran Abbas as Waqar and our very own heartthrob and eminent television personality , Shehzad Sheikh as Gulraiz.

The serial poses quite an interesting question; Kya aap ko ‘’Mohobbat Se Nafrat’’ hai?? … Love may be a beautiful phenomenon, till it becomes ugly. The ingenious title is reflective of the irony of love in all its beautifully painful glory. "Mohobbat Tumse Nafrat Hai", may be simple and subtle in its conception but it has thoroughly enthralled the audience, anxiously waiting for the serial to begin.

The intriguing, love-laced teasers have most definitely created a buzz around the upcoming drama, providing riveting insight into some intimate moments from the play – Ayeza Khan is seen grabbing onto Shehzad Sheikh’s hand, as she fiercely walks out of the room with him, leaving poor Imran Abbas behind…left to stare away. Will heartthrob, Imran Abbas be seen romancing Ayeza Khan in the upcoming drama, Mohabbat Tum Se Nafrat Hai, or will Shehzad sheikh steal the girl instead? Curious yet? As are we!!

‘’Mohobbat aksar wahan hothi hai, Jahan iss ki zaroorat nahi hothi’’. Quite the subliminally powerful highlight of the upcoming play; "Mohobbat Tumse Nafrat Hai". Not only has it been directed with consummate elegance and flair, rendering it a visually stunning piece of work, but also promises a substance-oriented, quality entertainment experience given its rich dialogue guaranteed to pull some sensitive strings and instigate intense emotions every viewer would be able to personally relate with.

The play explores themes of love, desire, hate, dramatic plotting, revenge and social influence cohering into a gripping arrangement of sub-plots, ultimately contributing to a fantastic story line designed with great finesse.  A series of heartbreaking real-life observations orchestrated into a soul-stirring narrative guaranteed to have you hooked till the final episode. Mark your calendars and unlock the surprises it has in store for you!

Produced under the banner of 7th Sky productions, previously having blessed the realms of entertainment with its super-hit drama epics like "Meri Zaat Zarra e Benishan" followed by "Noor-e-Zindagi", and now "Mohobbat Tumse Nafrat Hai", promising to appease the lofty expectations the drama-play has inherited, owing to its high budget production, inclusive of stunning promotional videos and gripping teasers, allowing the drama to become "the talk of the town".

The first episode of the epic romance narrative will be aired on Saturday the 8th of April 2017. Moreover, the premium quality project has been directed by visionary genius; Farooq Rind and written by none other than, the illustrious writer, Khalil-ur-Rehman Qamar who is, of course, recognized by his profound storylines and phenomenal drama plays having inherited the title of being one of the most influential drama writers of today.

Don’t forget to tune into GEO TV on the 8th of April, this Saturday, and prepare to be impressed.