Can Nageen undo the damage before Haroon departs? 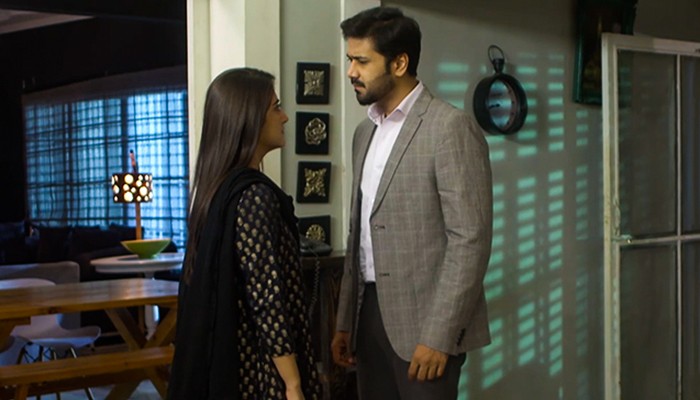 It seemed as if Nageen only had to protect her marriage from her former fiancé Sultan Durrani and Haroon’s ex-girlfriend Ramsha. The recent teaser has sent some new hurdles her way— with Haroon himself doubting Nageen’s companionship.

Although Sultan never used details of Nageen’s past in his tactics to distance her from her husband, Ramsha isn’t someone who would be as considerate towards Nageen. The previous episode showed Haroon confront Nageen for hiding that she had once worked as a bus hostess after Ramsha spilled the beans on her past. Haroon still isn’t aware of Nageen’s past with his boss Sultan Durrani as Ramsha has saved that part to intimidate Sultan for her personal gain.

That episode paved the way for more resentment between the married couple, with the teaser revealing that Haroon will then accept a new job based in a foreign country. On the other hand, Haroon won’t even consider it important to discuss the new opportunity with his wife. As Nageen will beg him telling him that she cannot live without him but Haroon will rubbish her plea, saying that he doesn’t think if they can even live together anymore.

This is where Ramsha will threaten her own boss for her benefit. Although Sultan had hired her in his channel so she would distance Haroon from Nageen. Knowing that it is another conspiracy from Sultan’s end, Ramsha blackmails him with his past with Nageen Faiyaz so he also sends her away with Haroon.

From what we know about Sultan, it isn’t difficult for Sultan to send her away with Haroon and it also falls in his own favour. But will Sultan let Ramsha get away with her courage to ‘threaten’ him in the first place? Will Nageen be able to undo the damage before Haroon’s resentment takes an uglier shape?