Will Naeem’s apology even make any difference in Mehru’s life? 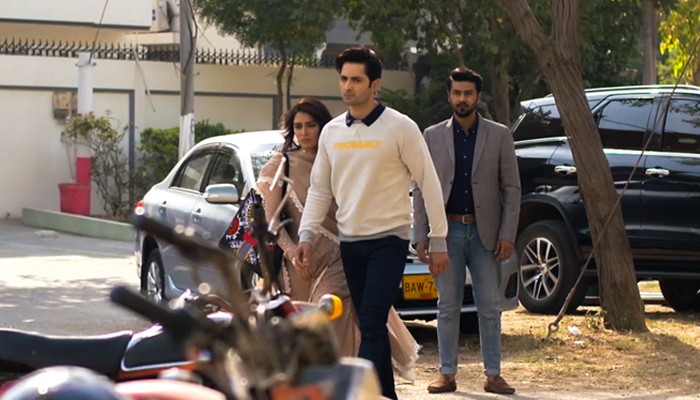 Meher Posh’s previous episode has finally put Shahjahan in some ease after Mehru recently decided to let go of her grudges against him.

Starring Ayeza Khan and Danish Taimoor in lead roles, Meher Posh has been revolving around the social stigma of divorce and repercussions of false accusations.

Being the strong person she is, Mehru doesn’t really need anyone to speak for her. However, after seeing Shahjahan come to her defense every time her former husband walks her way, Mehru finally acknowledged the goodness inside him.

Meher Posh’s audience saw everyone’s life collapse in the past episodes. But quite recently, the only character who was content throughout the fiasco, too, got a befitting outcome of her wickedness. Shakeela Begum, who was always disgruntled with her lifestyle, has now lost the only precious thing she had in her life; her own son.

The recent episode gave the viewers a sigh of relief when Naeem overheard his aunt, Shakeela Begum, assure her own son of Mehru’s modesty— the same woman who once insisted that divorcing Mehru was a good decision. Naeem's face flushed with regret as flashbacks reminded him how he had rushed into divorcing Mehru on their wedding night before she could even clear his misunderstanding.

The next thing Shakeela Begum saw was her own son, Waqas, choosing his newly-wedded wife over her when she pressurized him to divorce Abeer. Pretty ironic that the girl she disapproves of so strongly for being "indecent” and "unworthy" of becoming her daughter-in-law is the girl she wanted Naeem to marry.

As for how she wronged her own son, Shakeela Begum is now left with similar circumstances that she had plotted against Naeem's mother. At least Sakeena Begum has returned home to her son. Naeem, too, tries to reach out Mehru to seek her forgiveness, but realizes it is too late as now it is Mehru refusing to hear a single word from him. Which makes us wonder, is Naeem’s apology even going to make any difference?