A newly-wed couple, Haseena and Zaman are unable to find some time alone as Zaman’s mother Sabira tries to keep him away from his wife. Haseena who has realized her mother in law’s tricks decides to compete with her in everything. Amidst all of this, Zaman becomes the center of attention of both the ladies as they refuse to spare him for a moment. Tere Pyaar Main is a romantic comedy telefilm that revolves around Zaman as he finds it difficult to divide his time and attention between his wife Haseena and his mother Sabira. Despite daily arguments between Sabira and Haseena, will the family unite once they are exposed to a threat? 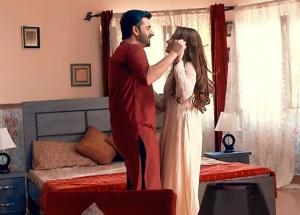 A recently-married couple from the showbiz industry, Agha Ali and Hina Altaf, have been making headlines for quite some time for their post-marriage...