Should a woman stay quiet after fingers are raised at her character? 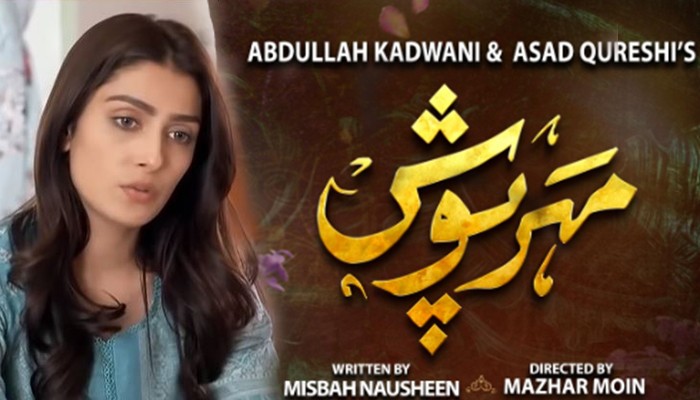 Drama serial Meher Posh recently aired its fifth episode which had us all asking the same question —should a woman stay quiet when fingers are raised at her character?

Produced under the banner of 7th Sky Entertainment, the producing duo Abdullah Kadwani and Asad Qureshi have focused on the plight of women who are failed by society and rejected because of baseless accusations.

Meher Posh began with fans singing praises of Ayeza Khan and Danish Taimoor’s stellar performances. The drama serial went on to a heart-wrenching situation where Ayeza Khan’s character - an innocent girl - is divorced on her wedding night over a misunderstanding.

Ali Abbas plays the husband, Naeem, who wanted to marry a girl with a spotless past. Naeem refuses to think clearly when he sees some guests at his wedding teasing Mehru’s neighbor, Shahjahan, using the bride’s name. The groom begins to fume when Shahjahan also responds to his friends. Naeem fails to understand that nothing is absolutely black or white, and goes on to misjudge and verbally abuse Mehru on their wedding night.

Meher Posh’s fifth episode opens in Mehru’s house where her family is mourning her separation. Shahjahan (Danish Taimoor) stands speechless — unable to confess that he is responsible for their suffering. Shahjahan accompanies her father to pay a visit to Naeem’s house where Naeem hurls abuse at them. It has been established that neither Mehru’s family nor her in-laws find out about Shahjahan’s guilt.

Directed by Mazhar Moin and written by Misbah Nosheen, the episode is packed with emotions and strong dialogues – one of which shows Mehru’s mother (Sania Saeed) tell her daughters that it is better to stay quiet when fingers are raised at a woman’s character. This raises many questions for the audience. Why do women shoulder the burden of keeping quiet? The drama depicts how women in a conservative society are made to fear a backlash even when their dignity is wrongly tainted by unfounded accusations.

Despite the tragic turn of events, Mehru’s father (played by Rehan Sheikh) is a father figure we all need in our lives. He has not only been a loving husband and a doting father in the past episodes but also a man of strong character who extends unconditional support to Mehru even after society turns against his daughter. The upcoming episode will show that his character not only sets the example of an ideal husband but also an optimistic father who has faith in his daughters.

A promo of the sixth episode hints that Mehru’s father will be venting out his anger at Shahjahan, while Mehru will be close to attempting suicide. As the drama serial progresses, the many twists and turns ahead promise to create a riveting experience for the audience.

Meher Posh airs every Friday at 8:00PM. You can catch the OST, the teasers and fresh episodes for Meher Posh on Har Pal Geo’s YouTube channel here. Don’t forget to subscribe to our social media pages on Facebook, Instagram and Twitter, to get the latest updates on Meher Posh and other shows.