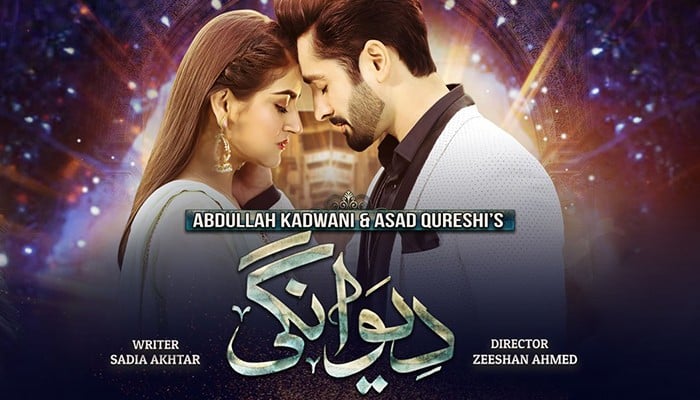 With 17 episodes aired, Deewangi has brought its audience to a strange realization. The drama serial shows Danish Taimoor in the role of a young and influential businessman, Sultan Durrani, whose love for a bus hostess for her simplicity and straightforwardness prompts him to go against all odds.

Producing duo Abdullah Kadwani and Asad Qureshi also unveiled the reason behind Nageen’s unwillingness to reciprocate his feelings after her fellow bus hostess gets assaulted with acid by a rejected admirer. Unable to come to terms with Nageen’s rejection, Sultan Durrani, too, ends up seeking vengeance by disgracing her in the eyes of the society.

Nageen’s crumbling life sees the dawn of a new day when she escapes another toxic situation in which her sister’s greedy in-laws try to marry her off to a goon. She crosses paths with Haroon (Ali Abbas) at a train station where he gets drawn to her, but it takes her some time to recognize him for the man that he is.

In the most recent episode, Deewangi’s storyline shows how the tables have turned for Sultan Durrani as he remains restless even after avenging Nageen. She, on the other hand, is on the brink of a nervous breakdown after being kicked out by her relatives and being insulted by Haroon’s mother, who disapproves of her son’s love for her.

The recent promo aired on Geo Television has the audience eagerly awaiting for the 18th episode — revealing how Sultan’s deep-rooted feelings for Nageen become his worst nightmare. It has been established that Sultan becomes unhappy with his wife Narmeen (Zoya Nasir) soon after their marriage, as he finds her demanding nature quite intolerable. He remains unfazed by his wife’s decision to leave. Sultan’s grandmother (Ismat Zaidi) gently asks him if he is still in love with Nageen which shakes him to his core.

Sadia Akhtar has also penned another twist in the script for Nageen as she will again struggle to find solace in her life, owing to the fingers raised at her character. In her heart, there is only one person to blame for her suffering… Sultan Durrani. After he aims to find her again, will Nageen and Sultan’s second interaction be as tragic as the first? Or will the storm of feelings finally settle?

Directed by Zeeshan Ahmed, Deewangi airs every week on Wednesdays at 8:00PM.