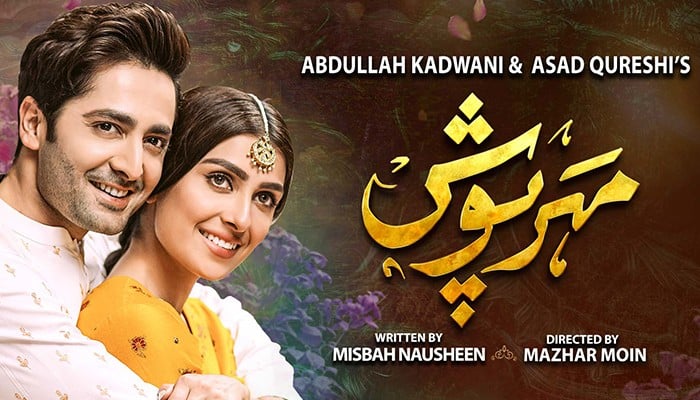 Meher Posh has already swept fans off their feet with its first episode (aired last week), which began with scenes of light humor in a loving family of four.

Fans are delighted to see Ayeza Khan and Danish Taimoor appear as lead couple on television screens once again, this time as neighbours Mehru and Shahjahan. Shahjahan refers to Mehru as ‘Mehru jee’ which points to an affectionate relationship between the two. Mehru’s father is very fond of Shahjahan for his kindness and for never letting them feel the absence of a son. Sania Saeed and Rehan Sheikh are playing the affectionate parents of Mehru and have already won the audience’s hearts with their onscreen chemistry as the ideal parents.

The first episode has made it apparent that Mehru is an extraordinary girl who hails from a middle-class family. Her charm is discussed at length when her fiancé’s aunt, Shakeela Begum, fumes with regret for not sending a marriage proposal earlier as her own sister-in-law, Sakina Begum, has finalized talks with Mehru’s parents before her. Although Shahjahan never expresses any feelings towards Mehru, his friends find him more deserving of Mehru’s companionship and often tease him on that matter.

This love story will take a more somber turn as Mehru’s fiancé Naeem, (played by Ali Abbas) who wishes to marry someone with a spotless past, starts to become doubtful of Mehru’s past by the end of the first episode, when he sees Shahjahan helping her with her wedding shopping.

Meher Posh’s teasers have already revealed that Shahjahan’s journey will be packed with guilt as he will blame himself for Mehru’s fate.

Ayeza and Danish’s first appearance together since their real-life marriage has proven to be a triumphant onscreen event with the first episode bagging more than 3.3 million views on YouTube so far. As the series progresses, the many twists and turns ahead promise to create a riveting experience for the audience.