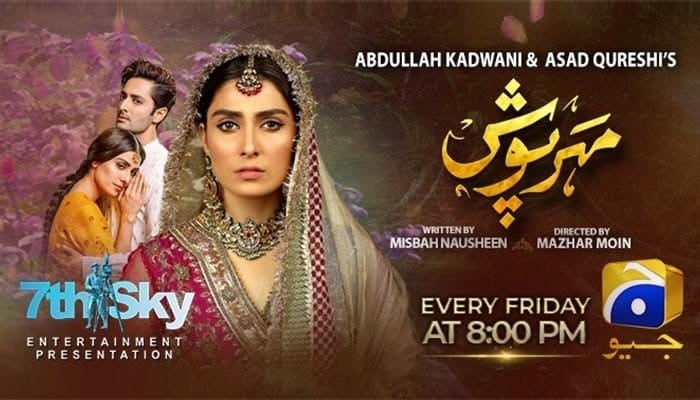 Geo Television’s mega project Meher Posh, which has been making waves ever since its teasers and sizzling new OST were unveiled, finally premiered on HarPal Geo last night. With over 1.5 million views on YouTube in just a few hours, the first episode of the hotly anticipated show is being lauded for its fresh new approach.

Produced by Abdullah Kadwani and Asad Qureshi’s powerhouse 7th Sky Entertainment for Geo TV, this love story features Ayeza Khan and Danish Taimoor’s much anticipated first appearance together as the leading couple in a drama serial since their real-life marriage.

Geo Television has already unveiled a handful of teasers, preparing fans for Meher Posh’s premiere. The story starts when Mehru (Ayeza Khan), whose dignity has been tainted by unfounded accusations, is divorced on her wedding night over a misunderstanding. The show follows Shahjahan (Danish Taimoor) as he struggles to undo the mistakes that have disgraced Mehru in the eyes of society.

Directed by Mazhar Moin and written by Misbah Nosheen, Meher Posh also features a stunning new sound track written, produced and sung by Sahir Ali Bagga. The lyrics of the soulful song narrate how some mistakes that one makes in love leave wounds that may never heal. If the popularity of the soundtrack, the teasers and the first episode are anything to go by, Meher Posh is sure to be a huge success.

Ayeza Khan also shared some beautiful images and shots from the upcoming serial Meher Posh on her official Instagram account recently, leaving her fans counting down the days to the release of the serial.

Meher Posh will air every Friday at 8:00PM from now on. You can catch the OST, the teasers and fresh episodes for Meher Posh on Har Pal Geo’s Youtube channel here. Don’t forget to subscribe to our social media pages on Facebook, Instagram and Twitter, to get the latest updates on Meher Posh and other shows.