GEO ENTERTAINMENT PRESENTS "MARZI" - THE TALE OF A HEADSTRONG GIRL, THE SHY BEAU AND HER ONE-SIDED LOVE. 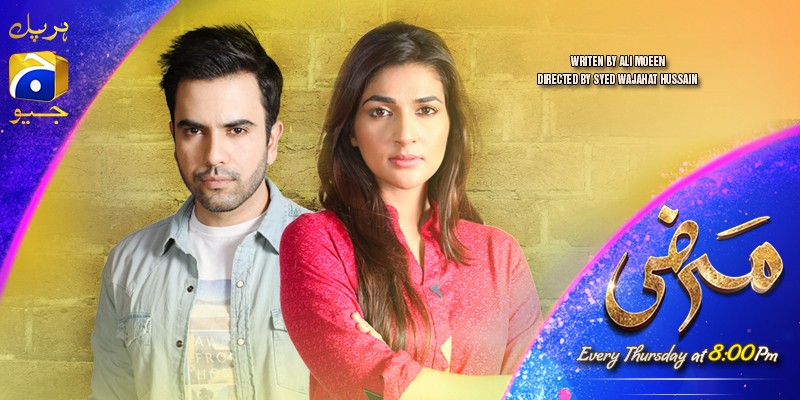 Greetings Geo TV viewers! Once again your favorite entertainment channel brings another family oriented drama serial for all age groups with titled "Marzi". Ina culture like Pakistan where all damsels in distress and the shy violets are appreciated, Manaal will shatter the stereotypes. The lead actress of this serial is headstrong, confident, aims to fight hypocrisy and resists giving into anybody else’s whims. In ‘Marzi’ the story of a financially downtrodden family of four, the mother, sister and brother live together as the husband of the eldest sister (Irfan) attends to their financial needs. Manaal was unfortunate to fall in love with her brother-in-law’s sister’s brother (Zain). It’s a unique experience to watch Manaal trying to make things work, while Zain backs out because of his loyalty and obligations to Irfan.

Rabab Hashim about Marzi: "Marzi is a project close to my heart. Manal is a character with great strength. She is not your average damsel in distress. She sees with clarity all that is wrong with the world and fights it. She detests hypocrisy in those around her. She resists giving in to anyone. She believes in free will and most of all love. Her vitality is striking. She intends to survive in a hostile world by holding her own. I hope you guys enjoy this one"

Now let’s talk about the cast of the new launch; Marzi

The life of the Drama is Rabab Hashim, the lead actress and a super talented on at that. Rabab has been a part of many projects of Geo TV and she has shown time and time how much of a versatile actress she can be. From her serious roles in ‘Ishqa Way’, ‘Anaya Tumhari hai’ and
‘Piya Mann Bhaye’ Rabab amazed us, her flawless acting brought those characters to life, and just when we thought we knew here; she surprised us with her happy-go-lucky and whimsical character in Mannchali. For Marzi, not only will Rabab be portraying a different role but also has a surprise in store for her fans. Her ability to get out of her comfort zone again and again is sign of true acting skills and Marzi will just be another testament to that!

The actor Junaid Khan signed up with Geo for this project after a stellar performance in Rasam. So far Rabad looked good and made a cute couple with every one of her co-stars, what do you think about her and Junaid?! What kind of on-screen chemistry do you think will they have, when Rabab would be all pushy and Junaid would be the shy one?!

The other cast members are also some very note-worthy names and ensure the success of this serial in advance!! Jana Malik, Babar Ali, Junaid Khan, Najia Baig, Khalid Saleem Butt would be starring in Marzi alongside Junaid and Rabab.

The drama is written by the superb writer Ali Moeen and has a promise of touching your hearts with it! This play would cover up all aspects of life, from the struggles, be them financial or being in love, to the beauty of life and jubilance and hardships of falling in love!

The much acclaimed director of Annaya Tumhari Hui, Wajahat Hussain is directing this play as well and with his band of experience, the drama is bound to turn out as amazing as his other

This fun and heart touching play is airing every Thursday at 8:00 PM. Don’t forget to watch Geo TV  and be let go of yourself for the next hour while you watch the word by the amazing Manaal’s eyes! Marzi will be all that you want in your daily drama serial and it would be totally worth your while!!