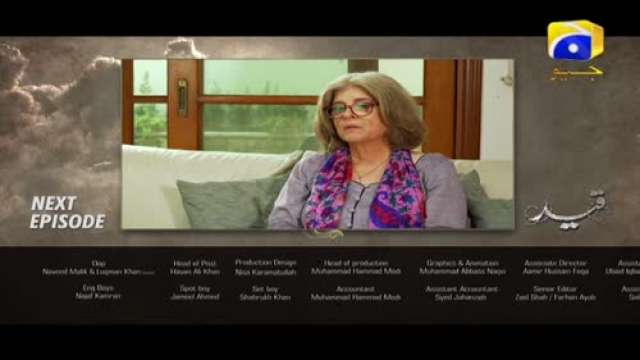 Qaid - Episode 15 Teaser | HAR PAL GEOrnrnRehaam and Ashir studied together in college and have been good friends, soon they fall in love. Ashir’s mother has taken over his deceased father’s business and has been struggling to keep this business alive, in the midst of all this she sends Ashir abroad to save the ongoing contracts. Before Ashir leaves he wants both families to meet and finalize his proposal for Rehaam. But unfortunately, Reham’s taya springs up the subject of her marriage with his son and her father and taya end up in a big fight and Rehaam asks Ashir not to bring his family as her father is not well.rnHeartbroken but willing to help his mother Ashir leaves the country soon while Rehaam is venturing into home tuitions and end up hired as Adaan’s teacher who is Ashir’s younger brother. This fact remains hidden as she builds a rapport with both Adaan and Ashir’s mother. All this leads to Adaan having a crush on Rehaam which at first Rehaam didn't notice but as soon as she finds Adaan’s behavior unusual she discourages it and leaves this job.rn Rehaam will accept the proposal and right on her wedding day, Adaan does something that brings Rehaam’s life to a point of no return. Viewers will see Rehaam making lots of sacrifices and viewers will see her suffer through others misdeeds but in the end will she be able to live a happy life? Will Ashir come to rescue her? Will Rehaam get the apology from people who have proven her wrong?rnWritten by: Shagufta Bhatti | Directed by: Mohsin Ali | Produced by: Shazia Wajahat & Wajahat Rauf | Production House: Showcase Productionsrn CASTrn Nesha Abdullah Khan as Suboorrn Mehboob Sultan as Inspector Jibranrn Nusrat Jahan as Parveenrn Shehzad Malik as Rehmatrn Ahmer Hussain as Muneerrn Rameez Siddiqui as Ahmedrn Mariyum Ansari as Farahrn Farah Nadeem as Tasneemrn Nida Mumtaz as Shakrarn Tariq Jameel as Barkatrn Saifullah Sohail as Adanrn Gul e Rana as Appa Birn Waseem abbas as Tufeeqrn Mareena Khan as Sofiarn Zara Noor Abbas as Rehamrn Syed Jibran Shah as Ashirrnrnrnrn#HARPALGEOrn#GEOrn#Qaid