On Geo Entertainment… Ramzan special drama is now getting popular!!

During the holy month of Ramzan, Geo Entertainment brings an unconventional and moral lesson based play "Dekho Chand Aaaya". The daily broadcasting serial is becoming more and more popular with every episode featuring on television screen. This special serial is all about Ramzan spirit and its virtues, the protagonist having character name "Chand" is shown as a simple religious girl having middle class background. She tied the knot with Hassan who is arich brat with poles apart religious aptitude in comparison of his better half. 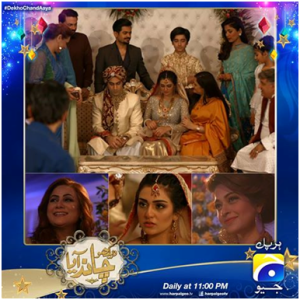 The sweet and helping bahu "Chand" is not only facing her husband’s cold behavior towards her but also different kinds of jiggery-pokery from jethani and dewarani. Her mother-in-law also taunts her at several occasions for not matching elite class standards.

Chand’s father-in-law and Tai Ammi are the only two characters who always talk in her favor and encourage her efforts for observing blessing month Ramzan with real spirit. Dekho Chand Aaya’s audiences will witness the positive outcomes from the selfless efforts made by Chand and a positive message at the conclusion of serial. 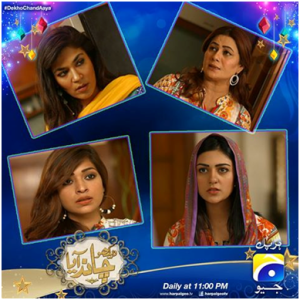 At "Dekho Chand Aaya" official facebook page (fb.com/dekhochandaaya), we are receiving frequent messages for liking and now it is already become talk of the town on social media. The very drama audience is appreciating Geo Entertainment’s step to display positive, worth watching and Ramzan theme based drama serial.