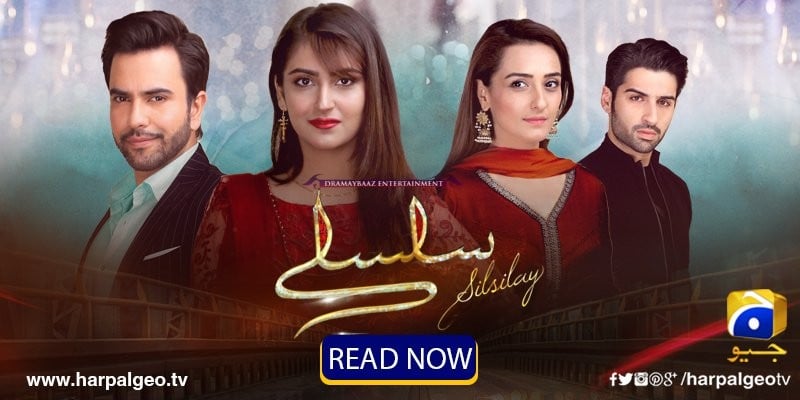 Silsilay - A Play about Broken Families

The emotionally driven and absolutely poignant  drama serial; Silsilay, directed by the brilliant Syed Wajahat Hussain and successfully managed to clinch an impressive record with the rating charts on Geo television, while it received an overwhelming response on YouTube.

Silsilay, boldly provides awareness concerning the issues that exist within broken families in context with the current social spectrum, and the powerful impact of certain inherited conventions on the youth - conventional beliefs instigating irreparable damage to relationships in broken families.

Under the overbearing influence of the society, we are inherently programmed to dismiss the irreparable damage we are giving rise to upon forming crass judgments the moment we hear terms like "divorce", "Parental separation" or "single mother". Silsilay, in essence, projects the idea that the absence of a father in a young woman’s life, does not give bystanders the permit to crucify or ostracize her - The play essentially embodies the monstrous, unforgiving anomaly of being a young woman, who has fallen victim to the preconceived notions concerning broken families, in the absence of a fathers shadow, deemed as her only source of identity and gateway to societal acceptance, her license to deserving respect; a fundamental human right, we so conveniently exclude her from.

Through the emotions of the protagonists; Hira and Abeeha, playing the roles of two sisters who share an inseparable bond, Silsilay projects the manner in which the relentless cascade of societal pressure affects child outcomes. If we were to truly endure the suffering and pain they undergo, owing to our inherited judgments, we would never ostracize them.

Hiba Bokhari adapts the character of a young girl; Hira, who is in desperate search of the identity of her father and the reason for the separation of her parents, which still remains a mystery. Hira senses the lack of respect she suffers from along with the unforgiving hurdles she falls victim to, owing to her family dynamic, which leaves her feeling terribly depressed and miserable. Through the boldly subdued narrative, Silsilay is asking an integral question; how much of this despondent behavior and loss of hope is attributable to the absence of a parent figure? How much is attributable to the practice of being looked down upon by the society? How much is attributable to the sort of relationship the child shares with the parent he/she is living with? Silsilay sketches out the answers to these intriguing questions in profound ways as the storyline unveils itself whilst maintaining the element of curiosity and the essence of an absolute "family-oriented experience".

Utterly soulful drama serial, ‘Silsilay’ is an experience like no other. Hiba Bokhari, Momal Sheikh, Junaid Khan, Muneeb butt, Shagufta Ejaz, Simi Raheal and many more. Watch Silsilay, every Tuesday at 08:00 PM, only on GEO TV.