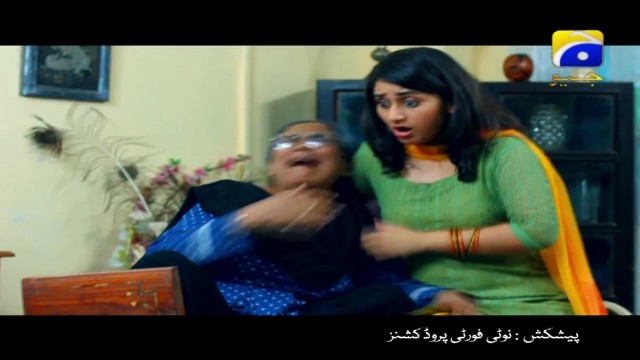 Zamani Manzil Kay Maskharay Episode 29 – Promo | Har Pal Geo rnrnOne of the best comedies of the season is on your way. Begum Zaman Akhter, head of the family has named her house Zamani Manzil which was given as a token of love by her deceased husband. The words of Zamani Begam, despite being bed ridden, are taken as a commandment by her children living in the matriarchal house.rnSaleem Miyan, Zamani’s son-in-law is a Nawab - a nawab without a single piece of jewel, has married her daughter. He has kept hawk’s eye on the Zamani Manzil to eradicate his misery; therefore he has decided to remain a "ghar jamayee". The so called Nawab is abhorred by the son Taufiq Haider and Ismat Aara daughter in law of the house, for sitting like a goof and consuming the household resources without burning a fraction of hole in his pocket.rnThe two men of the house get a shock when they find out that their children Chand Bibi and Mehboob are in love. Their mothers plot to keep them asunder but Zamani wants them together forever!!rn•tWritten by: Maahir Kamal & Faisal Manzoorrn•tDirected by: Raja Shahid Alirn•tProduced by: Naughty Forty ProductionsrnCast with respective character names:rn•tParveen Akber as Zaman Begumrn•tNadia Afgan as Mehrunisa (Zamani Daughter)rn•tRashid Farooqui as Saleem (Mehrunisa Husband)rn•tAsim Mehmood as Mehboob (Mehrunisa Son)rn•tFaisal Qazi as Taufeeq (Zamani Son)rn•tNazli Nasr as Ismataara (Taufeeq Wife)rn•tDania Anwar as Chandni (Taufeeq Daughter)rn•tNauman Masood as Rafaqat (Zamani Bhatija)rn•tGul-e-Rana Azhar as Khushnoodaara (Rafaqat Sister)rn•tRehma Saleem Khan as Shermila (Khushnoodaara Daughter)rn•tNargis Rashid as Shabbiran (Zamani Cousin)rn•tSana Askari as Pinno (Shabbiran Daughter)rn•tNaveed Raza as Bashira (Shabbiran Son)rnrnFor More Videos & Update - https://www.youtube.com/harpalgeorn#GEOrn#HARPALGEOrn#DRAMArn#ZamaniManzilKeMaskharayrn