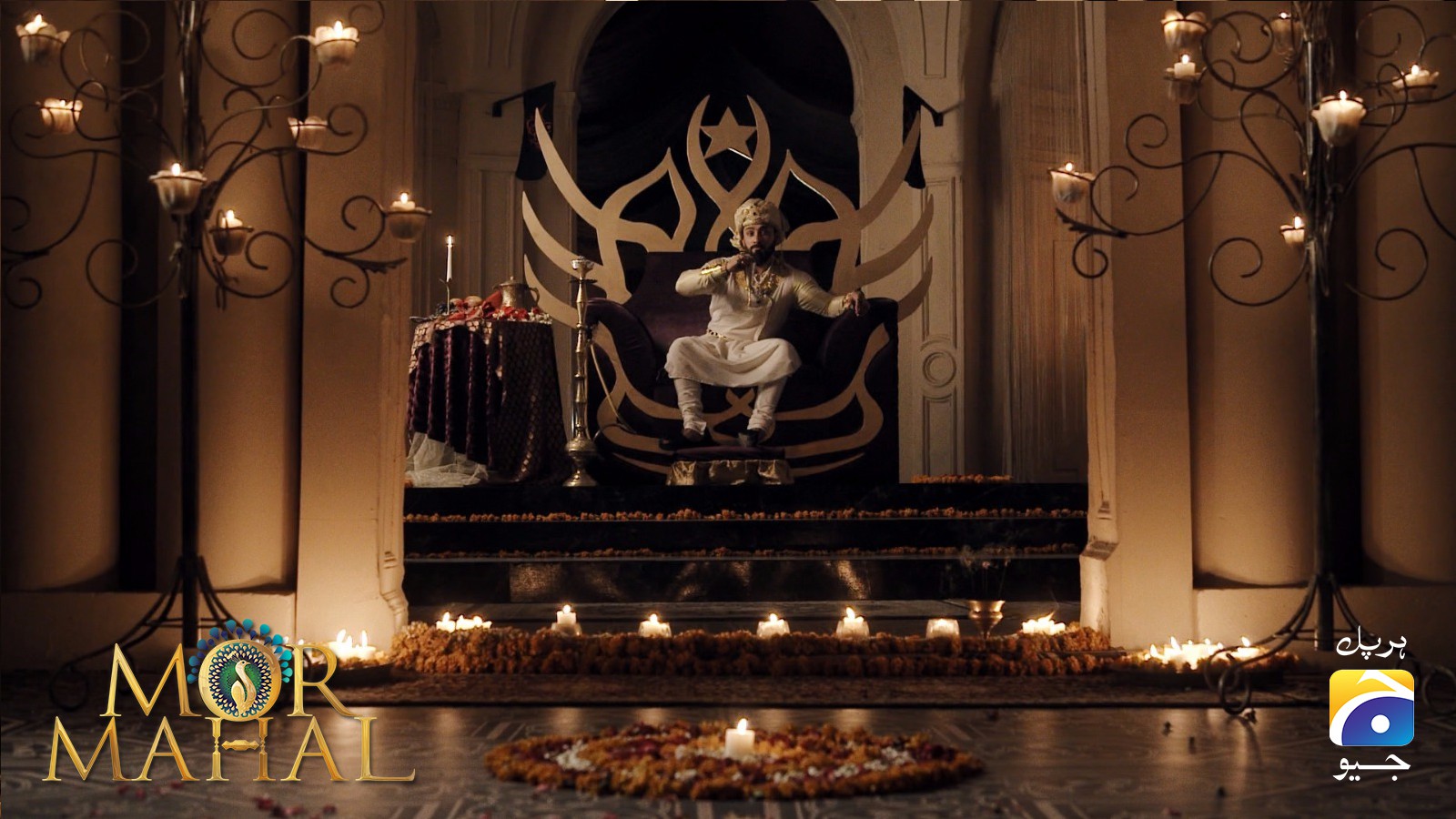 After what seemed like eons of anticipation, MorMahal aired on GEO TV, on April, 24.2016. A tremendous experience it was to watch it play out on the screen after immense speculation about the epic fantasy "MorMahal".

Produced by the unrivaled Babar Javed, based on the concept of Imran Aslam so eloquently put together and written by SarmadSehbai, MorMahal was directed by SarmadKhoosat, If its one thing this top-tier squad has prided the most about is the uniqueness of this show. Everything, from the art direction to the story line and actors of this drama, is fit to complement the other. Rooted around 200 years back, depicting the story of the Nawabof the fictional state of Jahanabad, MorMahal , his palace and the multiple women of his entourage. The most mesmerizing feature of the show is its aesthetics and art direction, this show depicts a rare fusion of the Mughal, Egyptian, Greek and Turkish cultures, evident from the moment MorMahal started. Every character was introduced as beautifully as if they were a part of the art itself.

The first episode started with the NawabAsifJahan ordering a prisoner to be executed with the flick of his hand, sitting in his chariot indulging in blood red wine. The backdrop of a desert and the magnificence portrayed by the UmairJaswal was a scene par excellence, a perfect beginning of the Most-talked-about show for years to come. The news of the victorious arrival of the Nawab puts the residents of MorMahal in a state of euphoria, preparations for his welcome start in earnest and the entire palace lights up for its ruler to come home.

Apart from what’s seen outside there is much preparation and planning going on behind the doors, whispers into the ears of confidantes, and assessments of rivals. The most powerful woman of the palace,SarwatJahanprepares for the Nawab’s arrival by sending the ‘urusidupatta’ to his newly wed Maharbano, hoping that their marriage would be consummated soon.

The only woman who is excited and happy about the sure arrival of the Nawab to her chambers is FarrukhZaad, his first and favorite wife, donning herself in magnificent jewels and sumptuous brocades. So sure Wazir Begum is, about her standing in the Nawab’s life that she laughs at Badshah Begum’s attempts to unite AsifJahan with his third wife.

The Second wife Surayya, who is pregnant, awaits for the Nawab with a heavy heart aware of the fact that FarrukhZaad’s charm and the consummation of his third marriage would be preferred over coming to her chambers. Yet, burdened by her insecurities, she resorts to seeking asylum in the power of various taveez and dumkapani to bring her husband to her.

Maharbano, the newly wed is still in love with her old love interest, refusing to accept her fate as the third wife of the Nawab of Jahanabad. This was Marriage of convenience, and not even the Nawab desires to consummate it, yet upon the insistence of Badshah Begum he bows down to her wishes. When Maharbano hears of his imminent arrival, she escapes the palace and leaves her bewildered maid Banki to handle matters in her wake.

The game changing moment was when the Nawab is ensnared by Banki’s simplicity and unmarred beauty, deciding to spend the night in Maharbano’s chambers with Banki impersonating her. This news drives FarrukhZaad to a point where she, acting upon her envy, drinks poison. Surayya ends her night in despair and Badshah Begum plans her next move with the assistance of her oracle, Akhtari.

MorMahal is an imposing structure, every wall adorned with glorious art and striking colors but surrounding the palace is an ominous hush, a darkness, a web of lies, power plays and seduction at its heart.