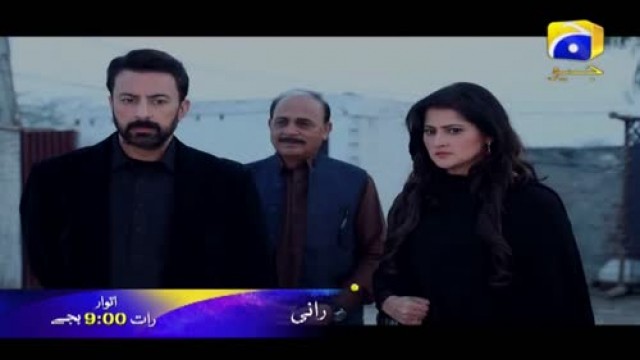 #Rani – Episode 42 Promo HD | Har Pal Geornrn#Rani is the story of a bold, exuberant and sagacious girl, who lives with her parents and brother in Meharabaad. Her family serves for a reputed shrine and spiritual inheritors associated with shrine. After the death of spiritual leader Peer Karam Shah, his younger son, Muraad Shah gets the holy turban on his head as his elder brother Nadir Shah is the result of a secret marriage of Peer Karam Shah. Nadir Shah’s mother Gul Bahar Begum belongs to red light area. She never gets the official family member status but she cleverly owns the mansion. Murad Shah lives with her mother Nafeesa, wife Faryal and daughter Rimsha.rnrnBilal, a modern thinking young man, who is also belong to serving family of shrine, doesn’t believe in backward ideology of his forefathers. His only interest in village is Rani. They are friends since their childhood and love each other with the core of their heart. When Bilal sends official proposal for Rani, her parents shows reluctant behavior as they want to tie the knot with wealthy and powerful person.rnrnRani’s parent clashes with Bilal Parents on the issue of land and local ‘Panchaiyat’ sits to solve the issue under the leadership of Murad Shah. He insists on the marriage of Rani and Bilal but Nadir Shah Kidnaps Bilal and reaches at Rani’s Place to marry her.rnrnThe emerging circumstances made Murad shah to react quickly and haphazard situation leads him to marry Rani. Murad Shah’s wife and Daughter opposes his second marriage but his mother sees it as an opportunity of male inheritor.rnrnWritten by: Anwaar GillanirnDirected by: Syed Faisal BukharirnProduced by: Mairaj Uddin & Ahsan KhanrnCast with respective character names: Kinza Hashmi as Rani, Babar Ali as Shah Murad, Saleem Sheikh as Nadir Shah, Rajab Butt as Bilal, Sahiba Afzal as Faryaal, Saba Faisal as Nafeesa, Sangeeta Begum as Niaz Begum, Rabia Tabassum as Khushbakht, Aurangzeb Laghari as Qutub Shah, Khalid Butt as Meher Ali, Naghma Begum as ZulekharnrnWatch more videos subscribe YouTube – http://www.youtube.com/harpalgeorn#HARPALGEO