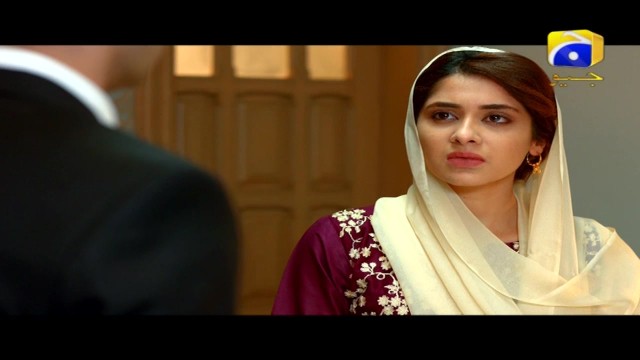 Malkin – Episode 25 Promo | Har Pal Georn"Malkin" is a story which narrates some of the evil traits of a human being like selfishness, greediness and being heartless towards other people. A woman can destroy a happily living family just for the sake of her own interest and desires.rnThis play revolves around the wolfish character Gulnaz (Maria Wasti), whose integrity and loyalty is pretty doubtful. She ties the knot with an unprincipled guy Yawar (Alyy Khan), he himself do nothing but spending an extravagant life just because he was born in a rich family. When Yawar introduces his wife to his mother Nafeesa Begum (Samina Ahmed), she rejects her and lawfully transfers all her property and assets to younger Son and his Wife.rnGulnaz, who is diabolic in nature, somehow manages to stay in Yawar’s mansion and she starts making scheme against other fellows. She wants to rule the house by hook or by crook and for her supremacy she can go any low. She destroys the happy life of her brother-in-law and sister-in-law to be able to hold all the property.rnWill nature take any revenge from Gulnaz? Will she ever feel guilty for her devilish actions? rnProduced by: Aijaz AslamrnDirected by: Syed Wajahat HussainrnWritten by: Sarwat NazirrnProduction House: Ice Media & EntertainmentrnName of artists with their character names:rnttttrnMaria Wasti - Gulnaz, Samina Ahmed - Nafisa, Alyy Khan - Yawer, Natasha Ali - Bisma, Taifoor Khan - Khizer, Azra Mansoor - Nagina, Adnan Shah Tipu - Munne Mamu, Umar Naru - Saif, Minal Khan - Semi, Areesha Razi khan - Neha, Mubassira Aapa - Surayya, Faraz Farooqui - Shahid, Aliya Malik - Najma Maid, Fouzia Sheikh - Perveen, Anees Alam - Munshi, Ali Ramzan - Ajmal, Ibaad Hussain - Tanveer, Shahrukh - Hassan, Maryam Khalid - Semi child, Shifa Akbar - Neha Cild, M.Moosa - Saif Child, Iman Sheikh - Samia child, Ahsan Khan - Shahid childrnrnrnWatch more videos subscribe YouTube – http://www.youtube.com/harpalgeorn#HARPALGEOrn#Malkin