THE SECOND EPISODE OF DRAMA SERIAL "SHAYYAD" HAS PICKED UP A SPEEDY MOMENTUM! 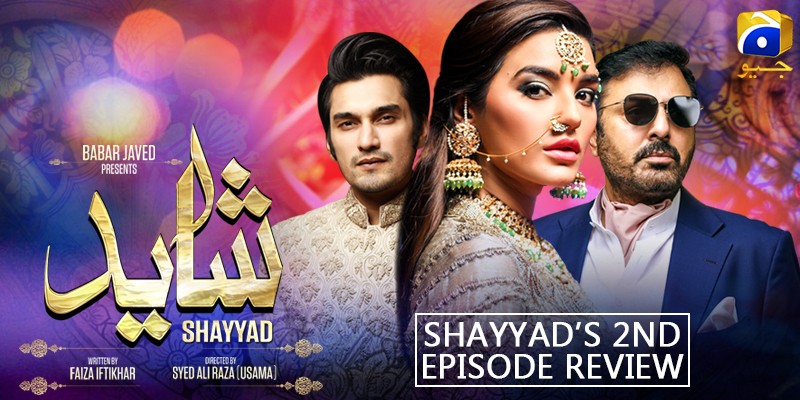 The second episode of drama serial "Shayyad" has picked up a speedy momentum in terms of story content.  The drama seems to be evoking everlasting emotions owing to the invigorating chemistry between the two very compelling actors; Uzair Jaswal and Sadia Khan.

The strongly knit relationship between childhood pals and cousins has given the show a nice feel to it that traces the roots of a solid romance.

The following incidents unfold in the second episode: The first scene catches up to the last episode where Umm-e-Hani’s cousin, Junaid, returns from England with a rishta proposal and Umm-e-Hani shows him around the Haveli. The one scene that made my heart sink is when Umm-e-Hani takes her cousin to a wall reminiscent of all her childhood memories, where Saad’s name is scribbled and witnessing Junaid write his name on that wall with spray paint deeply hurts her, and she is unable to conceal her sadness. This one scene has astoundingly captured the deep equation Umm-e-Hani and Saad share, which leads me to believe that this drama will most definitely redefine the manner in which friendships are perceived in the society.

In the events that followed, Saad senses something is stirring up with Umm-e-Hani and he instantly returns home in attempts of saving her from the rishta proposal she is being forced to pursue further. He completely goes marbles over the table when he puts up a heated argument against his parents and Umm-e-Hani’s phuppo to not force this marriage on Umm-e-Hani against her will.

The dream debut made by Uzair Jaswal is definitely set to fetch him the hearts of a hordes of female fans as his portrayal of the character Saad and his fiery love for childhood best friend Umm-e-Hani seems to warm our souls to the core in moments like him resting his head on Umm-e-Hani’s shoulder and mouthing, "Tumhari zulfon ki khusboo se tou mujhe neend hee ajati hai".

Hats off to the makers for blending an absolutely fine script, poignant screen play and a love story we can all relate to! Let’s see what the third episode will bring for the viewers, as it can be anticipated by the promos that Nauman Ejaz with some intense twists and turns in the story is going to dazzle the TV screens in the upcoming episodes!