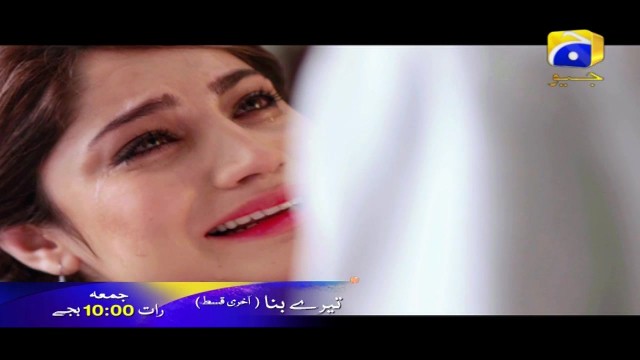 Tere Bina – Episode 31 Promo | Har Pal Georn#TereBina revolves around the central character Pakeezah, whose action taken in haste changes her life forever. She belongs to a middle class family having orthodox mentality mother, who often dictates her typical restrictions. Pakeezah on the other hand a freedom loving girl, having liberal point of view towards life and she’s in love with a guy named Umair. Her love interest, Umair is a native resident of another city but for education and business, he is temporarily living in a similar city.rnPakeezah’s mother fixes her match with a rich guy and this situation creates panic for two lovebirds. It is cleared to the love-couple that their families can’t accept this union so they decided for the option of court marriage. After the Nikah, Umair leaves her (Pakeezah) to his friend "Shan" and Shan’s wife Saima and promises Pakeezah that he will come back soon.rnPakeezah now keeps living in Shan’s house but when she realize that it has been very long and Umair is not coming back to her, she decides to reach at Umair’s house, where she got to know that Umair is trapped in a very critical family situation, where he is sacrificing to marry his brother Zubair’s fiancé as Zubair backed out.rnUmair was shocked seeing Pakeezah at his house, where Pakeezah introduces herself as Umair’s frined not his wife. Will Pakeezah ever able to disclose her identity as Umair’s wife?rn Cast: Sami Khan, Neelum Muneer, Humyaun Ashraf, Fareeha Hassan, Qavi Khan, Shabbir Jan, Laila Zuberi, Farah Nadir, Saleem Mairaj, Iqra Shahid, Parveen Akbar and others.rnWritten by: Saqlain AbbassrnDirected by: Syed Ali Raza UsamarnProduced by: Aijaz AslamrnProduction House: ICE Media & EntertainmentrnWatch More Videos Subscribe - http://www.youtube.com/harpalgeorn#harpalgeorn