KHAN HAS A LICENCE TO KILL - 5th Episode 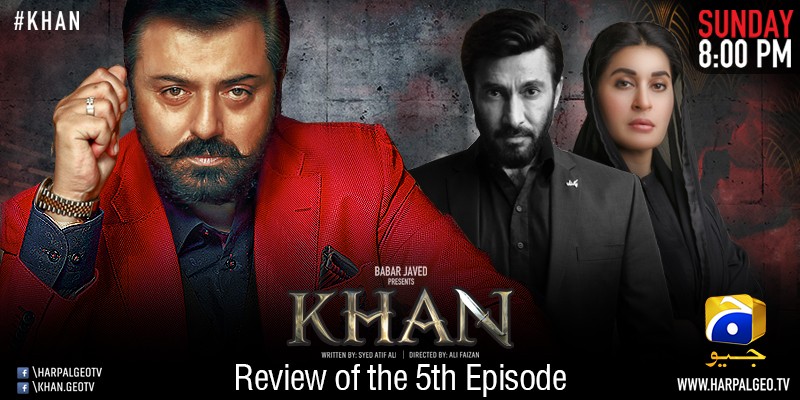 The 5th episode of Khan took a rather intriguingly dramatic start. The death of Jameel has most definitely shaken its viewers. Handsome and influential jameel is no longer alive. Sarwat is now a widow. Not to mention, a miserable one. The episode starts with a bang! There is chaos and police everywhere, the media and press are present as jameel’s body is being taken away.

A new character has been introduced in the last episode and He makes quite a dazzling entry during the scene of chaos and mayhem. This new character is the Brother of Jameel, named tahir, who was the highlight of the opening scene. Quite a status quo figure he is. It is of course suspected that Jameels death was a case of Murder and not suicide. The ruthless press is very keen on dissecting thematter, as per usual.

Shabbana appears to be shocked, she uses terms like ‘’How strange’’ and ‘’shocking’’ in response to the news of jameel’s death as a case of suicide. She was immersed in a discussion with Khan.

In another scene, shabana explains to khan that she is tired of the monotonous life. They share a few words of romance, Khan; the loving husband is reminiscing with Shabana. Amidst the romance and love, khan received a phone call. To his surprise, It was ‘’Sarwat’’ calling.

“kyun mara hai tum ne jameel ko, tum jhootay ho, makkaar ho tum’’ ,doosri  baar barbad kia hai tum ne mujhe, main tum se nafrat karthi hoon”  These were explicitly the words of Sarwat.  Harsh words eh?? Especially when they’re coming for someone used to be the love of your life. Khan is drowning in Sarwats accusations; he is guilty beyond measure and can’t seem to get her out of his head.

Throughout the episode, Sarwat is of course in tears, mourning the death of her love. She is playing the role of the quintessential, dedicated housewife of a feudal man.  All visitors and guests seem to be reciting duas and offering their condolences.  Jameels brother Tahir was also present there.  He recommended “ehtijaaj’”. Tahir believes that Jameels death is not suicide, but murder committed by a rival as revenge.

The police on the other hand is not getting access to “jameel ki bewa ka bayan”. Apparently, the brother in Law, Tahir was not allowing it earlier. But the police somehow finds a way to make Sarwat talk. Sarwat explicitly says that jameel had not committed suicide but had been murdered. And of course, the wife’s statement is more credible than anyone else’s. Hence the police also placed a great deal of value upon it.

The strange twist in the plot was Rahats peculiar phone call. She is on call with a man named anwar who is telling Rahat he is in town. To which she says “jantay  ho tum kithnay dushman hain tumharay yahan”.

Anwar seemed to be full of vengeance and claimed to seek revenge from these ‘dushman’. Anwar insisted on meeting Rahat. At first she was hesitant claiming that “Hifazat ke naam par nigrani hothi hai hamari”. (Clearly, she’s’ smarter than the other members of the family and acknowledges the doings of Khan.) But later she agrees and meets him at the hotel. Anwar’s refuses to leave the country alone. He wants to take Rahat and the kids along with him. These two appeared to be past lovers, fallen victim to tragedy.  Their conversation over coffee was rather perplexing. Khan was the murderer of Rahats husband and Anwar’s friend. They both seemed to be discussing murder quite casually. Rahat perpetually used the name Haqdaad for Khan. Haqdaad is Khans real name.

But here’s the interesting part, while Rahat (Khans Appa) is busy conversing with Anwar in a hotel. Khan and his men are using all their force and power to inquire about her whereabouts.  During this scene khan revealed that he ensures Rahat lives in his house so that nobody harms him because of her and so that she is safe as well.

Coming to the relatively lighter sub-plot. The romance between young Humza and Bina seemed to take an uglier turn in the last episode. She excitingly visits him at his brand new ‘’gifted’’ apartment. Bina seems amazed by the spotless condition of the living space along with his brilliant art work. But his reaction caught the viewer’s off guard.

“kyun kar rahi ho tum yeh drama”, says Humza to Bina. She appeared to be as perplexed as the audience would be. He tells her that no matter how wealthy she and her father may be, he can’t be bought. But Humza ends up paying for his words. Toward the end, khan’s men threaten to chop his fingers off for making precious Bina cry.

Will Khans men harm Humza? Will Rahat run off with Anwar? Would Sarwat be able to forgive KHAN? And most importantly, was Khan really the murderer of Jameel, or was it ‘suicide’? Keep watching to find out how this story unveils in the next episode on Khan every Sunday at 08:00 pm only on Geo TV.