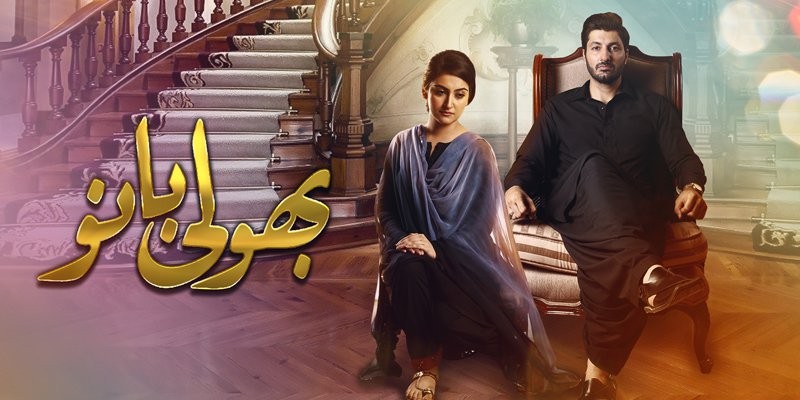 In the previous two episodes of Bholi Bano, we have seen how Bano and Subhan have become the new best friends. Subhan’s visit to Hyderabad has strengthened his relationship with Bano. Perhaps he is falling for her. They seem to be re-living their childhood memories, exchanging gifts and venting out to one another. Abid was furious to catch these two sharing their moments of friendship in the courtyard during late hours. He begins to ream her out whilst reinforcing that she is no longer a child, and is becoming a woman. Even though Abid himself seems to be too occupied dreaming about his sweetheart Shehla and her glimmering MONEY.

It’s strange.  We always expected Abid to be a nice hearted boy. Considering how the two women he has been raised with are completely different from how he is.  By now… we aren’t sure if he loves Shehla or not.

Naani is extremely disappointed in her son Abid. She is a simpleton, and dreamed of bringing a "saleekaykaar bahu" with her own wishes. No surprise there, she is an aged women who lives in Hyderabad. Her disappointment was expected. Besides, we all saw how Nani’s proposal meeting with the in-laws went. Shehlas father was constantly degrading Abid by demanding him to bring chai for everybody. Shehla was slightly embarrassed, but Nani had been observing the demeanor throughout. "Ham ne aap ke betay ka rishta kabool kar liya hai jee." Said Shehlas father, half-heartedly. In response to which Nani says "Lekin mein ne tho rishta MANGA hee nahi." This was a clear indication of the fact that she highly condemned this wedding. While Abid is so blinded by his love for money, he fails to realize that he is being buried under the weight of Shehlas fathers ‘ehsaan’ over and over. He wants to quit his job and live off her money.

Although Shehla has made it absolutely clear to Abid that she will never live in his house. Her lifestyle includes servants on one call and carpet under her feet.

Although Shehla’s shrewd Daddy warns his little girl several times about Abid and his relatively "backward" mother in law. He tried explaining to his beloved Shehla that Nani wouldn’t be able to understand Shehla’s ultra-modern lifestyle, and that Shehla herself would feel embarrassed in her social circle and status-conscious community. Their reputation would be in shambles if she were to go ahead with this decision but Shehla is also blind in love and isn’t acknowledging the repercussions. She may be embarrassed by the cheap , light weight, gold bangles Abid’s mother (nani) has given to her, but she isn’t focusing on it as of right now. Right now, she only wants Abid.  But Greedy Abid is too busy accepting credit cards and cash from his sweet dad-in-law to shop for the wedding. Shehla’s father love for his daughter has forced him to take the decision of getting them married. The nikkah finally takes place, and guests are invited. Only the immediate family members are present, as Shehlas dad would feel "humiliated" if his guests were to attend and meet Abid mediocre family. Nani feels utterly disrespected but of course, Abid has lost all self-respect and he is content.

On the other hand, gold digger Zeenia appears to be too worried about winning Tajdars heart. She continues to pester her mom throughout the last two episodes and makes several inquiries about Tajdars divorce. She is too busy dreaming about her wedding with Tajdars, unable to comprehend that his status is much higher than hers and it may be an impractical approach to go after them. Although her mother says there is no comparison between the families, Zeenia refuses to listen. In fact, she is trying extremely hard to win Begum Kulsoom’s heart in attempts of marrying her wealthy son, that she gives herself a self-invitation to visit Kulsoom Begum in sickness. Zeenia plans on staying at Begum Kulsoom’s house for a few days.

There is one tragedy in the serial which is truly gripping i.e Subhan appears to be the real victim. Seeing the innocent face in tears would melt the strongest of hearts. Poor Subhan is constantly being reamed out by his ruthless step-mother and he feels absolutely helpless. Do you think there is any ‘’good’’ written for Abid in the future? It seems unlikely. What’s surprising is that his father is too blinded as well. He doesn’t realize what he’s doing to his son. Although, towards the end he lands upon the conclusion that he would want to open a general store which would be managed by Subhan. Evil step-mom is very unhappy with this decision of course. But that was expected.

Quite interestingly, the hero and the heroine of the serial have us gripped and wanting to know more about the future of their story. Once again Bano crosses paths with our heartthrob, Tajdar. It appears that he is smitten with Bano. Unfortunately Bano is too naive to realize the powerful effect she has on him. Either ways, this definitely qualifies to be the highlight of the previous two episode.