KHAN’S 3rd Episode made the audience Hooked to Television Screen 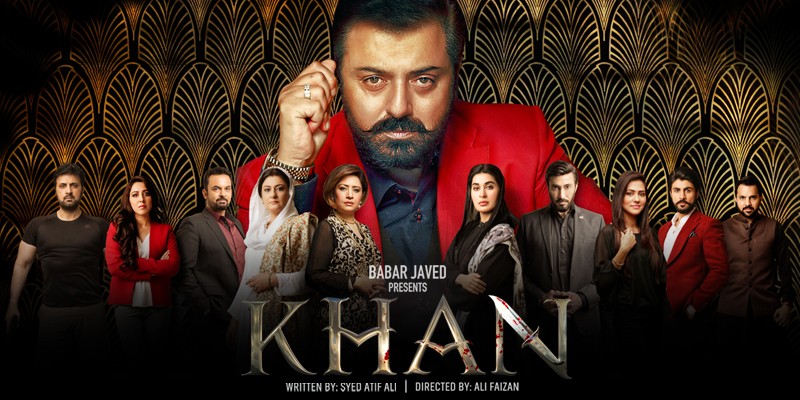 "Sarfaraz Phupha ka bhi, ‘Accident’ howa tha na?" Neelum asked in a rather sarcastic tone. Perhaps Young Neelum is sensing something peculiar. She doesn’t seem entirely convinced that an ‘accident’ might have caused the death of her husband. You’re in trouble, Khan.

The developments in Khans character have served to widen the scope of the story. KHAN appears to be more ruthless than it was earlier perceived, as we receive more insight into KHANS role in the play, we learn more about his devious ways and shrewd tendencies. "Eemandar ko Baimaan karne main kithna waqt lagtha hai? Agar badh nahi hai tho badhnaam kardo ussay, Eemandar aadmi darta hai tho sirf apni izzat se. ‘’, Quite a brilliantly formulated dialogue I must add. Even during lunch Rahat insinuates that Khan is a ruthless individual who enjoys bloodshed. "Issay Lal rung bohoth pasand hai, chahay who chatni ka ho, ya KHOON ka", She says, directed towards her brother Khan. Disturbed yet? I know I was. Especially when Noman Ijaz’s performance as Khan is doing absolute justice to the role, it has successfully evoked fear within my heart. Fear of a man who exercises power in the game of dirty politics. While Khan’s Wife, Shabanna, always appears to be very defensive of her husband.

In the last episode, we are introduced to another young interesting character named Sohail.  He is a painter, and seems to a past lover in the life of Neelum. Neelum appeared to be in a rather ‘delicate’ and vulnerable state during her period of ‘’Iddat’’as the manner in which she was conversing with her class-fellow Sohail was very reflective of her sensitive state. There are things she is holding in, and wants to say to Sohail. But she is reluctant. However she does ask Sohail to"keep in touch". While this phone call is taking place, the quintessential Phupho, Rahat, being played by Saba Hameed, is eavesdropping and intently listening to the conversation.  Later, Rahat especially instructs her son to keep a special eye on Sohail as she does not wish for any ‘rishta’ (proposal) to come for Neelum.

The third episode was intercut with scenes sustaining a light, romantic tone. Khan’s youngest daughter Bina appeared to be smitten by a painter, who is a simpleton, an artist attempting to sustain a meager existence. And she is seen exchanging romantic text-messages with him. The love-birds conversations are surprisingly being tracked and read, just by the way. Looks like Daddy; Khan, like every other protective father likes to spy on his little girl. However, it did not end there. He was abducted by some men and warned him to take special care of Bina. Who do you think is behind this horrendous act? On the other hand, Khan’s eldest son, Kamal always seems to be romancing his phupphos daughter, Naila. She is extremely possessive about the man of her dreams, Kamal. In fact, she seems to be more into him than he is into her. Although, here is the episodes icing on the cake. Apparently, Khan also appears to be active in the romance department. He is seen engaging in a discussion with a particularly young beautiful woman. We still don’t know of the dynamics of their relationship. However, it was concluded that they were not meeting inside Khans house, but somewhere else. ‘’Main kabhi kabhi khuwaab dekhne kagthi hoon. Meray our Aap ke.’’ She says to him after which she holds his hand to comfort him and he doesn’t object.

Jameel’s discovery about Sarwat; his wife, being the rape victim was undoubtedly the highlight of the 2nd episode and will advance the plot towards a more gripping and complex track. However, in the last (3rd) episode, Jameel is raging with anger, yet he doesn’t directly question his beloved wife about the incident, instead, he subliminally mocks her falsely portrayed ‘’innocence’’.Jameel’s performance has been remarkable; he is deeply affected by the fact that he had been blinded to the bitter truth all these years. He feels betrayed by Sarwat as she successfully concealed something so significant from her husband despite her claims of love for him. Jameel decides to send Sarwat to the village for a day, on the pretext of an important meeting.

The multiple sub-plots within the serial are artfully interlinked to one another. The integration of plots in KHAN essentially covers all the aspects of a multi-dimensional drama-thriller, whilst sustaining the original tone of the serial covering all the themes of romance, revenge, love, tragedy, family and so on.  It isn’t an easy task to orchestrate such a smoothly integrated narrative with the inclusion of multiple plots and surprisingly, the story of every character is receiving enough screen-time.

Ali Faizan; the director of KHAN, has accomplished the fulfillment of a daunting task. And he has done the job meticulously. However, my personal favorite plot is Jameels relationship with Sarwat. The dialogue exchanged between the couple is intelligent and poetic, tastefully gripping and symbolic. "I love you’, she says to him. The gesture is not returned by Jameel. "Kabhi, Dil toota hai tumhara?’’. Jameel asked her, to which she responded diplomatically and said ‘’Tornay ka irada hai kya?’’. Perhaps Jameel’s subliminal messages are triggering Sarwat senses and haunting her, however she refuses to consciously acknowledge or respond to any of it.

While Sarwat is away, Jameel swims though Sarwat’s closet and ends up finding some old pictures enclosed in a diary. This scene was definitely a winner. This definitely qualifies as the most intriguing plot of the series. And I can’t wait for Sunday to come to be able to find out what happens next! Here is what excited me: Jameel found pictures while sarwat was away. ‘’Mohobbat thi, tho hawass kahan se agayee’’, said Jameel to himself. Jameel is perplexed; he is attempting to understand how rape could ever come in between love.  When Sarwat returns, Jameel says to her, "Pehlaay aitmaad khattam hotha hai ya mohobbat?’’ Sarwat demands a straightforward response from Jameel. She feels that his behavior has changed. Jameel mentions to her that he wants to invite guests over for dinner. Whom do you think Jameel wanted to invite? ‘’Kabhi kabhi who log bhi heraan kardethay hain, jinhain aap barson se jaante hain’’. Said jameel, to his beloved wife.  Well, the episode climax reveals that Jameel has invited KHAN and his wife over for Dinner. And Sarwats countenance is priceless. She is shocked to see Khan. And Jameel appeared to be enjoying the ‘dramatics’ of the situation.