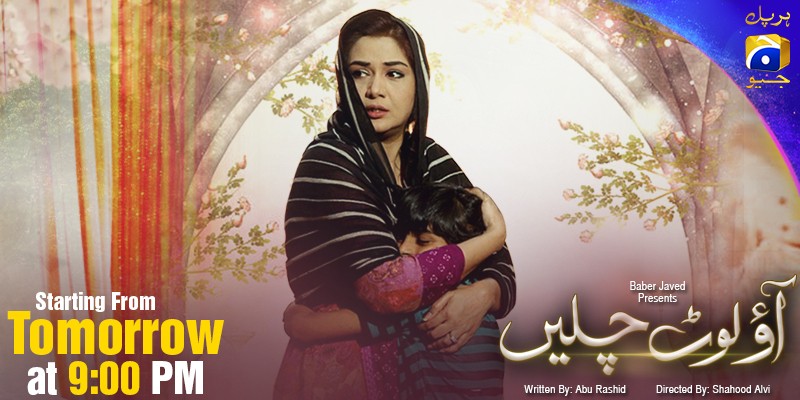 Hello Fans! Pakistan’s most watched entertainment channel is bringing yet another serial based on unconditional love and social sufferings of a mother. May you all have seen our previous block-buster shows like Meri Maa, Ali Ki Ammi, Mann Ke Moti, Deemak, Meri Dulari and this list just go on… NOW! "Aao Laut Chalein" is another offering from Geo TV that is going to portray heart-wrenching story of a mother and her son.

Geo Television always keeps its flag high when "Mother Feelings" & "Mother’s emotions" are going to broadcast on television screen. We all know, a mother’s love for her child is like nothing else in the world. It knows no law, no pity; it dares all things and crushes down remorselessly all that stands in its path. BUT!! Something very unusual is going to happen in Geo Television newly launched serial "Aao Laut Chalein".  When a mother reaches to a situation where she is unable reciprocate similar kind of affection for her son, who needs her unconditional love and care.  OHH MERAY KHUDA! Kia qismat itni sangdil bhi hosakti hai? Aik Maa apnay lakht-e- jigr ko apnay say juda karkay muashray kay rehmo karam pay chorh deti hai *Tears in eyes*

Renowned actress Naheed Shabbir, who has already played number of characters in Geo TV’s drama serials like Pyari Shammo, Tere ishq Mein, Khuab Toot Jatay Hain is now performing the helpless mother role. She is clearly instructed by her second husband to not to be associated with her past and relations. And that second husband is Shahood Alvi, by profession he will be seen as a car mechanic (Ustaad Roshan). Not only this, Shahood Alvi himself directed the heartbreaking story, he has already done steering for “Mujhe Kuch Kehna Hai” as well. Geo TV viewers are going to witness some remarkable characterization and tears shedding script.

Drama serial "Aao Laut Chalein" will be starting from TOMORROW at 9:00 PM. Please keep your tissue paper box nearer, because we are sure you will not be able to control your emotion while watching sorrowful scenes of constrained mother & vulnerable son.