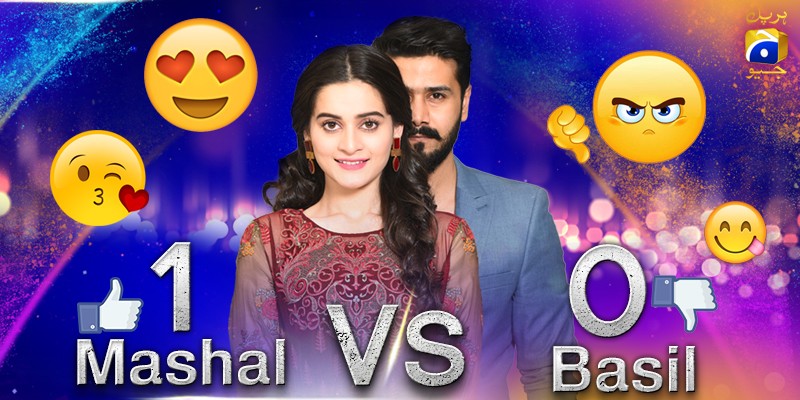 OHH EMM GEE! Khaali Haath’s Mashal not only rejected to appear in a live chat along with villainous Basil but also won over him with heavy margin in likeness and fans engagement. Mashal, who earlier appeared on Khaali Haath’s live interaction with fans, received enormous response and sympathies while Basil returned empty handed. Ah! *As you sow, so shall you reap*. It seems like audience really starts hating Basil character and they don’t want to talk with him at all even on social media. It was an eye-opening fact that throughout the live session, female fans were cursing Basil for doing wrong act with innocent Mashal. *Basil Aap Bohat Buray Hain* !!!

Pakistani Showbiz industry heartthrob Aiman Khan, who is now emerging as social media diva and most liked actress on instagram, facebook and twitter also proved her likeness at Geo TV’s official page. Her Khaali Haath’s promotional appearance received more digital viewership while Basil wasn’t able to attract even half of it. Basil this is what you really deserve #KthnxBye

Well on an honest note, Audience hate for Basil is an actual win for Ali Abbas as an actor *Thumbs UP*. Also rating meter for television industry is indicating viewer’s sky-high interest in Geo TV’s Khaali Haath. The percentage of popularity from 1st episode to 4th  episode has already jumped 65% up side. The first episode of "Khaali Haath" got 2.5 (Avg TRP) and now Fourth one received 4.13 (Avg TRP) while acclaiming second position on Monday 8:00 PM slot.