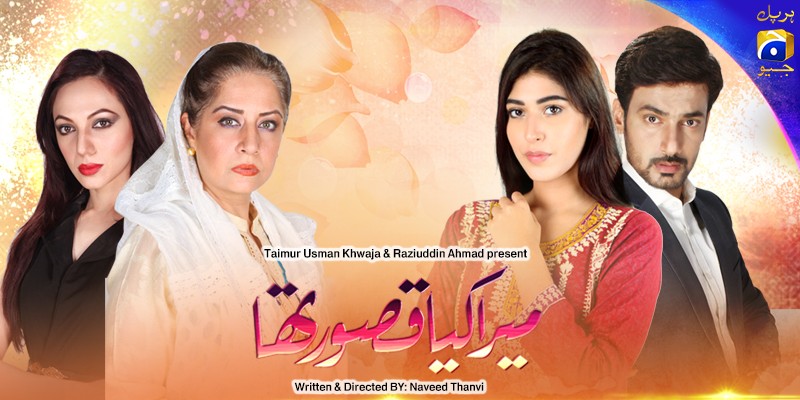 Drama serial "Mera Kya Qasoor Tha" finally coming to end.  The episode Finale is going to air tomorrow on the 26th of February 2017. Don’t forget to tune into GEO entertainment at 09:00 pm to watch the last episode of your favorite drama serial and satisfy your curiosity towards the ending!

We have all been anxiously waiting to find out how the story of ‘’merakyaqasoortha’’ unwraps towards the end. Undoubtedly, we have learnt a lot from this emotionally-driven narrative

Let’s evaluate how far we have come from when the story had initially started to develop. ‘’merakyaqasoortha’’ is a story centralized around Shaista, who is the female protagonist. She was married off at an awfully young age to Qasim; sonof an affluent business tycoon, Qudratshahab, owing to her father’s compromising status as he was indebted to Qudrat .  Although initially the marriage appeared to be a rather positive experience, as the storyline developed further, we began to encounterthe theme of ‘planning’ and plotting’. Shaista is victimized throughout the drama series as she has been subject to mistreatment and her marriage has proven to be decision gone terribly wrong. The dirty internal politics allowed the serial to inherit a rather edgy and appealing appeal.

What our audience are most interested in, is the love-triangle the story essentially revolves around. Rohail may be every woman’s dream, but will Shaista reciprocate by responding to Rohails undying feelings for her? Or will she suppress her longing for a happy, functioning married life and her desire to be with a man who provides her with the love she deserves? Is unrequited love the most terrible thing one can experience?

In the backdrop of this ultra-dramatic and unfortunate love story, exists devious scheming and plotting, along with gunshots and spy-activity in attempts of tracking every movement of innocent shaista. Keep watching, to find out whether these complexities would untangle and advance the storyline towards a positive slope or will we encounter a sad ending. Don’t forget to watch the last episode of ‘’Mera kya Qasoor tha’’ this Sunday at 09:00 pm only on Geo entertainment.