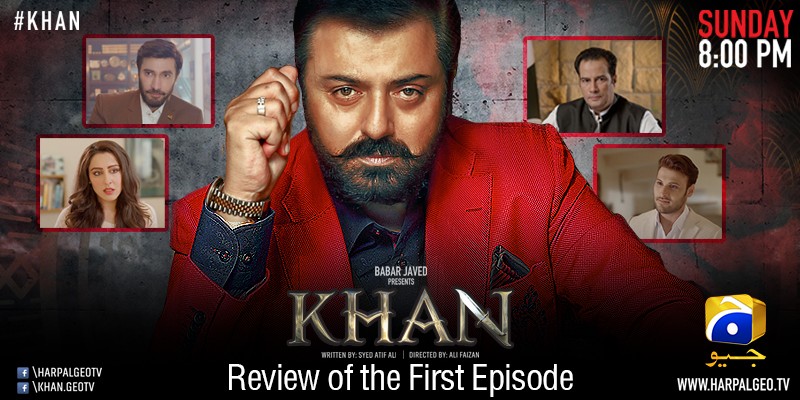 THE RESPONSE HAS BEEN OVERWHELMING!

The episode was aired Sunday, 19th February at 8:00 PM on GEO Entertainment. In all honestly, the KHAN experience was quite pleasing. Not only did it incite eagerness to find out how the story would unwrap itself and satisfy our curiosity. But it served to be quite an emotional journey which explores the sentimental relationship a father shares with his daughter, rendering it as ‘relate-able’ as possible.

We had already been aware of the profound role Nouman Ijaz was to play in the serial, KHAN. However, after watching the first episode, we learn about the intensely sensitive characteristics of KHAN’s personality. Despite being a politically influential figure, who is deeply involved in the filthy, corrupt and power-driven culture adapted by our state and political personalities.KHAN displays traits of a loving father, a dedicated family-oriented husband and a fun-loving member to the family. However, the episode did reveal some perplexing situations where KHAN is engaging in a discussion with his rival "Jameel’’ played by Ijaz Aslam. The two affluent figures don’t appear to be friendly; in fact, they blatantly threaten one another in attempts of fulfilling their motives. We hope you are curious to find out how this deep rooted rift develops into something more furious. We know we are!

The first episode endeavors to provide us with an understanding of the roles being played by different characters in the backdrop of their association with KHAN, along with how they could be contributing to the plot.

The last scene of the first episode of KHAN definitely qualifies as a cliffhanger. Would Neelum ever find out who is responsible for inflicting pain on her beloved husband, Haider? Would she despise her father for doing so, or would she secretly appreciate His actions?

Keep watching KHAN to find out what happens next. Don’t forget to tune into Geo Entertainment, this Sunday at 08:00 PM. Do provide us with your valuable feedback.

Tell us what you thought of the first episode in the comments below and on facebook page of KHAN.