BROADCASTING FANTASTIC 4 SERIALS ONCE AGAIN ONLY ON GEO TV! 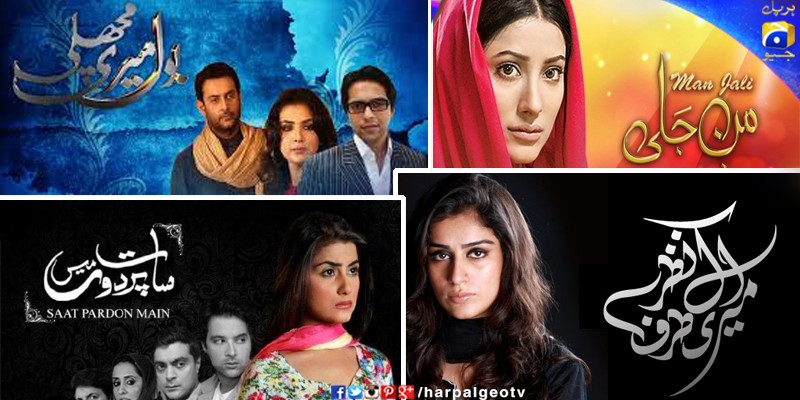 Greetings Geo TV Viewers! Your favorite entertainment channel is reviving good old memories of blockbuster drama serials by airing them once again. This list included some really special plays like Bol Meri Machli, Saat Pardon Main, Ek Nazar Meri Taraf and Manjali. Gripping stories, impactful dialogues and star cast made all such serials a MEGA-HIT in past and still they have all the capabilities to take you in the fantasy world of emotions and related stuff.

A drama serial based on the harsh reality of today’s society and talks about how difficult it is for a woman to step into the outside world without her reputation being tainted for life. The cast included star icons of our showbiz industry like Fahad Mustafa, Sami Khan, Shahood Alvi, Ayesha Khan, Tooba Siddiqui and Javed Sheikh.

Saat Pardon Main is a serial based on a woman, who lives in her fantasy world and fall in love with an onscreen hero. He never treats her like a heroine and this reality made her heart-broken. The glamorous and bubbly Sohai Ali Abro has played the leading role. Some other popular artists included are Mikaal Zulfiqar, Aly Khan, Qaiser Khan Nizamani and Sabeen Balouch.

This is a social issue based serial which highlights a taboo; widow girl is often made isolated in our society and never given a right to remarry the man of her choice. The cast of play included Alishba Yousuf, Mahnoor Balouch, Babar Ali, Noman Ejaz and Nimra Bucha.

Manjali is really an unconventional play which tells the story of a strong willed and free-spirited girl, who wants to achieve her own dreams and easy going lifestyle. Full of innumerable twists and turns, this is an intriguing tale which will leave you spellbound with its powerful storyline and magnetic performances. Your favorite actress Mehwish Hayat is playing the leading role while other performers are Sajid Hassan, Saba Hameed, Faris Shafi and Mikaal Zulfiqar.