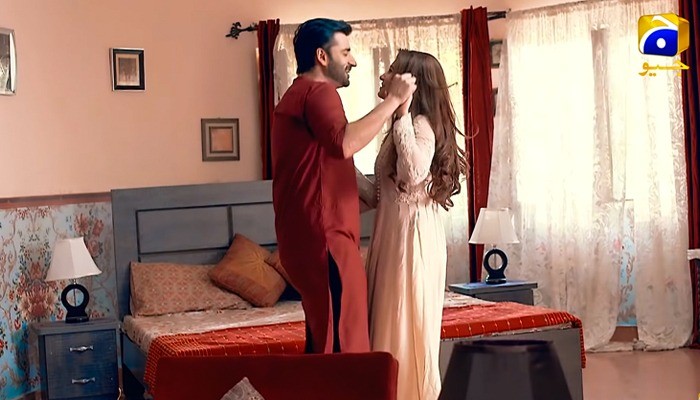 A recently-married couple from the showbiz industry, Agha Ali and Hina Altaf, have been making headlines for quite some time for their post-marriage projects together. This blog has sprung on a similar occasion, anticipating their upcoming telefilm ‘Tere Pyar Main’.

With Eid-ul-Adha just around the corner, Geo Television has this romantic comedy waiting to premiere on television screens. The teaser of this family-centric telefilm features the real-life couple in a reel-life wedding. The scene opens in a bedroom— with Hina Altaf’s character, Haseena, waiting for her groom. Agha Ali features as another lead character, Zaman, who can’t believe his eyes as he sees the girl of his dreams dressed as a bride.

The one minute teaser shows a few more glimpses of his happy marriage. Which brings the viewers to wonder what could possibly be the worries in their life?

Here’s a little bit from the synopsis. The only worry in their small world includes a grumpy family member— Zaman’s mother. Haseena and Zaman are unable to find some time alone as Zaman’s mother, Sabira, tries to keep him away from his wife. Having realized this, Haseena also does all that she can to compete with her mother-in-law— which makes Zaman the center of attention in the family as both the ladies refuse to spare him for a moment.

In this rollercoaster of high drama, romance and comedy, it is yet to be seen if the family can unite once they are exposed to a threat?

Tere Pyar Main is a presentation of the country’s leading production house 7th Sky Entertainment owned by the dynamic duo Abdullah Kadwani and Asad Qureshi. This telefilm is written by Samra Bukhari.