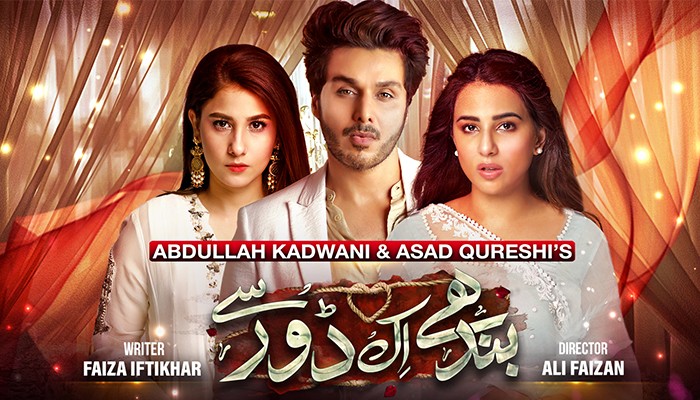 A handful of picturesque teasers of an upcoming drama serial Bandhay Ek Dour Se have the fans counting down the days left in its premiere scheduled on June 25, 2020.

Last week, Bandhay Ek Dour Se gave us an original soundtrack rich in melody, followed by a bunch of teasers that feature scenic backdrops, enchanting ambiance, and a delivery of beautiful and striking emotions from the lead cast, starring Ahsan Khan, Ushna Shah and Hina Altaf.

Quite recently, a few more teasers were rolled out— hinting at what to expect from the story.

This time we're looking at Ahsan Khan take on a romantic and strong-willed character, Umar, who is struggling to resolve a stifling situation. Ushna Shah features as his cousin, Maheen, who deeply cares for him irrespective of what choices he makes. Although Umar has a soft corner for Maheen, his heart beats for Roshni.

It is apparent from the teasers that no matter how much Maheen tries to understand Umar’s worries, she can never win the affection he has for Roshni. Although Maheen will be seen comforting Umar on many occasions, she will soon find herself giving in to his lack of interest in her.

On the other hand, Hina Altaf adds a whole different energy to the scenes owing to her role as Roshni. Umar seems to smile with his heart and soul whenever he’s with Roshni.

Ahsan Khan and Hina Altaf's onscreen chemistry follows up with every vibrant scenes. The teasers tell a lot about Umar's love for Roshni as he would even climb from one to another rooftop just to catch a glimpse of her. But it is apparent that all of them will have to go a long way to get what they desire.

Much of the credit goes to Ali Faizan for directing the drama serial with an excessively fine detail— making this drama serial about a lot more than just its star-studded cast. The soundtrack sung by Hadiqa Kiani and Sahir Ali Bagga has also won hearts for its defined melody— bagging more than 1 million views on YouTube already.

Bandhay Ek Dour Se is slated to air every Thursday at 8:00 p.m. only on Geo Television.